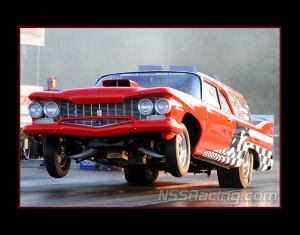 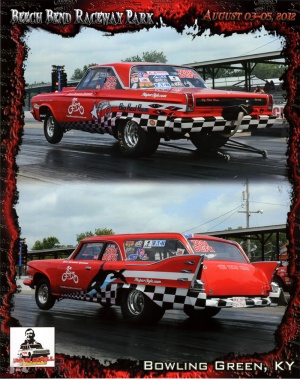 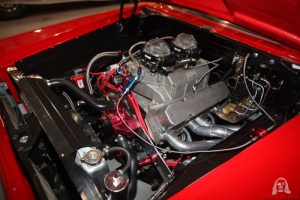 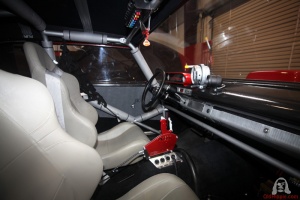 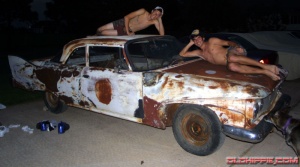 The Texas Whale is a 1960 Plymouth Suburban 2-door station wagon that is currently raced by Dave Schultz in the Nostalgia Super Stock Class of NMCA and other NSS events. Depending on the corrected altitude, the car currently bounces between B/FX (9.50-second 1/4 mile), C/FX (9.75-second 1/4 Mile), and A/NSS (10-second 1/4 mile).

The car is primarily crewed by Dave's son Dallas Schultz, who races a matching (in paint scheme) 65 Dodge Coronet NSS car by the name of Big Red Ram.

Both cars are owned by the MoparStyle Racing division of DDS Enterprises.

The torque converter is an 8" ATI Tree Master and the flex plate is from B&M.

The [[front suspension] is completely stock as prescribed by the rules. The rear suspension is a coil over 4-link with a Ford 9" rear end and Richmond Gear 4.68:1 ring & pinion gear. The car is tied together by the cage and sub-frame connectors. The rear shocks are currently QA1 single adjustable.

The cage was custom built using Chrome Moly tubing by Mark Artis at Texas Thunder Performance in Frisco, Texas. Mark also did the initial back-half of the car, with Mat Wright of BRC Racecraft in Newburgh, Indiana performing some modifications and fine tuning. 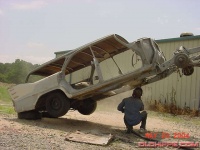 Blasting away the rust 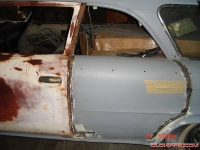 Conversion to a 2dr 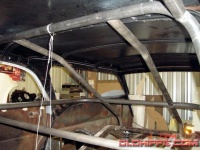 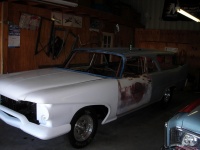 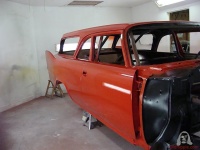 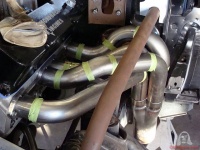 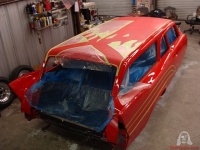 Dave was racing a 1965 Dodge Coronet (later to become the Big Red Ram) in Nostalgia Super Stock, and was looking to race something a little different from the norm. His favorite finned car was a 1960 Plymouth, as they have the tallest fins of any production American car (no it wasn't the 59 Cadillac or the 57 Imperial) -- and it just happens that not only is it the first year of a Plymouth legal to run in NSS, but no one had ever built one to race in NSS.

Dave bought a 2-dr post 60 Plymouth that had been a Texas DPS (Department of Public Safety - State Troopers) car, with a 383 and three-on-the-tree. That car became known as POS. However, before sending the car off the get built into a NSS car, Dave ran across a 60 Plymouth Suburban Wagon on eBay. Is was a 4-door, Slant 6, three-on-the-tree from California. When the wagon arrived from California, it was cleaned, and had the drive-train and interior pulled. It was then sent to Ken Presley in Conway, AR to spend the next three months having the body blasted, repaired, and put in primer.

From there the car was delivered in 2004 to Mark Artis with Texas Thunder Performance in Frisco, Texas -- where it was to spend the next six years being transformed in a NSS Legal race car. While there it was decided to convert the car into an exact replica of the rarer 2-door wagons offered in 1960. This required a complete 2-door post car as a donor, to give up it's center section -- including the larger front doors and the metal behind the door.

Custom molds were made from the bumpers, front fenders, hood, and tailgate -- and fiberglass parts were pulled from those molds.

Dave picked up the car in November 2010 from Texas Thunder, and brought it back to his shop to finish the drive-train installation, interior, some of the electrical, etc.

The car was not near ready to start the 2011 racing season, so Dave raced the Vitamin C until the motor blew at the Joliet race. With the Vitamin C no longer available, Dave brings the black Coronet his son was racing to the Dave Duell Classic (as Dallas couldn't make that race), and he actually won Class in that car.

The Texas Whale was finally ready to take to the Milan race. At the Milan race the car broke in Qualifying when the Torque converter bolts backed out and destroyed the converter and flex plate. There was also some suspension binding going on, with a component of the 4-link slapping the underside of the car on launches. The car was not able to be repaired for Eliminations, and was dropped off a BRC Racecraft on the way home to have Matt modify the 4-link, scale the car, and replace the converter and flex plate. Dave and Dallas picked the car up on the way to the final race of the year at Indy.

At Indy, the axle splines tore out of the spool in the first time trial. He was carrying a spare chunk and it was in the car in time for Dave to make the final qualifying round. Dave won his first round of eliminations, but the engine acted up badly on the trip back to the pits, and Dave was unable to make the second round. As luck had it, the other car couldn't make the second round either, and the 3rd round would have been a Competition Bye in a Double Points event. Dave dropped to 7th place with the year's Bad luck.

Back at the shop it was found that the head gasket had failed and a groove had traveled between two cylinders of the head, causing cross-fire. The engine with less than 10 passes on it would have to be rebuilt.

The motor was rebuilt and back in the Texas Whale for the first race of the year -- which was in Bradenton, Florida in March. Dave only had one time trial pass, and declared a A/NSS Index as the motor was tight. In qualifying the motor loosened up and the cars was way too fast for the index, causing Dave to have to lift. He did manage going three rounds, losing in the Semis by breaking out.

The next race was at the Texas Motorplex in Ennis, Texas, and Dave won the NSS Class of the event.

The third race was in Atlanta, and although the Texas Whale was the number 1 qualifier, Dave was waived back in the first round when a drop of oil was spotted dripping from the car in the burnout.

The Texas Whale was again the Top Qualifier at the next race in Maryland, but Dave lost track of the faster car (leaving later), and lifted thinking the other car had broke -- and that car pass him at the line.

Dave was Top Qualifier at the Dave Duell Classic in Bowling Green, Kentucky; and was runner up in Class -- but lost in the first round by taking too much stripe and breaking out.

At Joliet the car was terribly inconsistent on the short times, and had a terrible event.

In Milan Dave was again the Top Qualifier. He made it to the Semis, but the weather had gotten so bad that the car couldn't run its index even with the passenger seat taken out. He lost with a 9.79 on a 9.75 Index. At this writing Dave and the Texas Whale is technically in first place (when you consider bonus points), with one race left in the season -- the Double Points Nats.

The car is still having some suspension issues, and Dave will have Matt look it over on the his way yo Indy, and see if he can squeeze it it to be fixed over the winter. Also, it is suspected that the 572-13 heads are too much heads for the cam Dave wants to run, and the engine will be pulled to be used as the backup, and the spare 580 CI engine being converted to 440-1 heads and a milder cam will be swapped in over the winter and tested before the first Points race of 2013.

Dave and Dallas have not yet made a decision on if they'll again run the NMCA series for 2013 -- or give the Victory Series a try. Both are about the same distance (far!) from Texas.