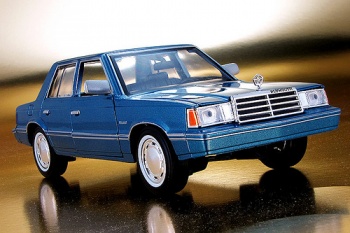 The K-cars, the Dodge Aries and Plymouth Reliant, were, quite literally, the cars that saved Chrysler. In 1979, as Chrysler CEO Lee Iacocca was asking Congress for loan guarantees that would save his company its first brush with bankruptcy, early test versions of these cars were provided as proof that the carmaker could compete, if given the chance.

The sales pitch worked, and so did the K-cars. Chrysler paid off its $1.5 billion in loans ahead of schedule.

Fortunately for Chrysler, development of the front-drive K-Car line was already underway when Iacocca got there. First sold as the 1981 Dodge Aries and Plymouth Reliant, the four-cylinder K-Cars were extremely simple, extremely boxy, not particularly powerful, boring in almost every way and destined to save the company. Every new car developed by Chrysler throughout the '80s and into the '90s would draw upon components and structures that originated with the K-Car.

The K-Car includes cars made on the K-Platform, but there were slight variations to that original FWD Platform, which were given the platform designations of E, G, H, J, C, A, and P. Some of these designations were used earlier in the 60s and 70s for RWD platforms, but have nothing in common with them. The FWD versions will be discussed here in the K-Car topic, rather than in the RWD Platform topics with those designations.

The K-Car was to the original minivan, what he Volkswagen Beetle was to the Microbus. The FWD platform without a driveshaft tunnel allowed for a lower van that the truck based ones.