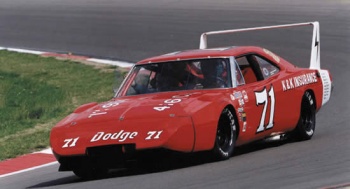 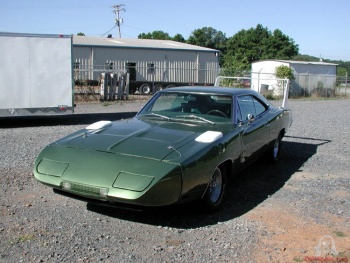 The midyear 1969 Dodge Daytona was specifically built for competition on the high bank Super Speedways of NASCAR. The 1969 year had started out with Dodge fielding the 1969 Charger 500, which was a standard Charger with a rear window plug to fill in the concave rear window area and flush mounted front grill from a 68 Coronet to help in aerodynamics. Ford and Mercury responded with the Talledaga and Cyclone, which had better yet aerodynamics. Dodge countered back with adding a aerodynamic nose to cut through the air and a high rear wing to plant the rear wheels. These car dominated the rest of the year and broke the 200mph record for a stock car. NASCAR required 500 street versions to be built for a model to compete.

The following year a combination of The King driving for Plymouth and the new rule change for one street car per dealer (Plymouth had far fewer dealers than Dodge) caused the Daytona to be replaced by the 1970 Plymouth Superbird.

Many Charger 500's were cloned into Daytona's in the 80s. Both the Charger 500 and the Daytona had the second digit of the VIN being x, so the only way to know for sure if a Daytona was cloned from a Charger 500 is the VIN's sequence number -- as the Charger 500s were all built before the first Daytona was. & there are some 500's that have a vin of xs29

While some Daytonas may have ultimately left the US, there was no specific "Export Versions" of the Daytona.

The second digit in the VIN for 1960 was the vehicle's price class. On the Daytona, that would be a X, SO a daytona vin is xx29

All Chargers, including the Charger 500 and the Daytona built in 1969 were B-Bodies.

The Daytona could be had with either the 727 Torqueflite automatic transmission, or the 883 4-speed manual transmission.