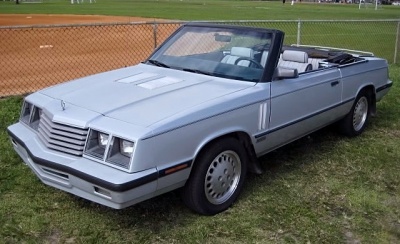 After the reorganization of Chrysler under Lee Iacocca into the New Chrysler, most all of the 8 cylinder RWD cars were abandoned for FWD 4 and 6 cylinder cars. The first two were the Plymouth Reliant and the Dodge Aries, which were bases cars. The 600 was a step up in status over the Aries -- and replaced the J-Body Mirada.

This was the first of a long wonderful line of Mopar electronics. From the 84 turbo cars on all of the cars to date don't require a scanner to get fault codes. Just turn the key on and off 3 times and leave it on the third. If there is a leaky hose, bad connection or a bad sensor the blinks out the code on the power loss light or the check engine light. A true Mopar plus.

The car is a mid size class car

The rarest is the Copo Military issue turbo Reliant K wagon. Built for a military contract there are only 40 made and they were not sold to the public. To get one you had to wait till the military finished with it and auctioned it. 3 are known to exist, they can be noticed by the turbo hood that looks like the GLH turbo hood with one side vent.

In 1987 the K-body coupe and convertible models were dropped.