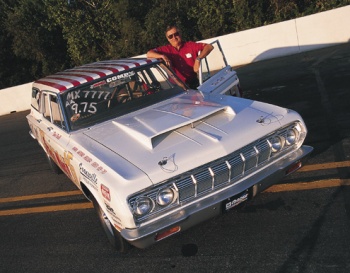 Many consider Dave Duell to be the Father of Nostalgia Super Stock racing, because of his organization of NSS Racing at the Monster Mopar Weekend. Following his death, the NSS racing portion of the Monster was renamed the Dave Duell Classic, which is currently administered by Dave's son Doug.

Duell was a longtime drag racer, and back in the heyday of '60s-era factory involvement, Duell had a 425-horse Max Wedge Dodge 440 wagon with horsepower courtesy "Akron Arlen" Vanke. This machine set NHRA national records and was one of only a handful of wagons that raced competitively in any form of racing. Vanke, the well-known Super Stock star, was involved in every aspect of the wagon, and Dave credits him greatly for the success garnered by the early Drag'n Wag'n. Though Duell's involvement with the automotive business would take him away from racing for many years, the memories remained.

After creating a '64 Max Wedge Sport Fury clone in 1990, he decided it was time to turn back the clock. His son Doug took over the controls on the two-door and Dave and his crew got down to business to create a near identical 64 Plymouth wagon, also called the Drag'n Wag'n.

Dave was instrumental in advancing Nostalgia Super Stock racing at the Monster Mopar Weekend each September, NSS was the only racing class at the Monster open to all makes of eligible cars.

Dave's son Doug Duell has stepped into Dave's shoes by running and expanding the Evansville dealerships (2) that include Mazda, Kia, Volvo, and Hundai; restored Dave's Drag'n Wag'n and raced it to multiple Point's Championships; administers to the annual race called the Dave Duell Classic, and serves on the board of Santa Clothes.