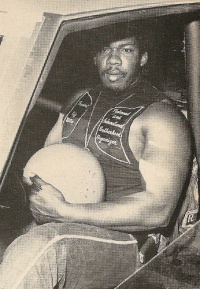 Big Willie Robinson has some college education. He originally attended LSU as a pre-med student, but had his car vandalized and he then decided to move to Los Angeles and attend UCLA until family finances and his parents getting divorced forced him to drop out. He was then drafted by the US Army.

Big Willie Robinson became a decorated Green Beret in the US Army. Along with the Los Angeles Police Department organized street racing in a successful attempt to avoid a repeat of the Watts Riots.