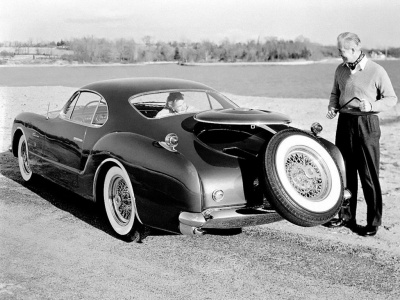 The Chrysler D'Elegance was the second (the first being the Chrysler K-310 of the Dream Cars Virgil Exner was responcible for at the Chrysler Corporation. The D'Elegance picked up where the K-310 had left off, sharing a similar front end design. It featured a lot of items that would later appear on production cars. A dash mounted shifter would later appear on the 55s. Power Steering and Power Brakes on the 56s. Gunsight Tail lights would appear on later Imperials, and the Toilet Seat/Bird Bath trunk embossing on all of the late 50s and early 60s Chrysler Corporation Makes.

The Metallic Red sports car is said (by Exner's son to name one) to be Exner's favorite car. It is one of the fortunate ones not to have met its fate in a crusher or on a sunken ship. It was driven over 100,000 Miles by the owner who had it the longest, and the car has had at least five different engine/transmission combos.

There is often confusion on if this car was a 1952 or 1953, or if there were even two different cars. It was considered a 1953 when it debut at the Paris Car show in October 1952. The best explanation is that the chassis was a 1952 Chrysler, while the body was considered a 1953. As such, the car has been referred to as both a 1952 and 1953. However there is only one Chrysler D'Elegance. Later there would be a 1958 Imperial D'Elegance show car. 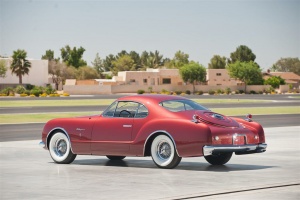 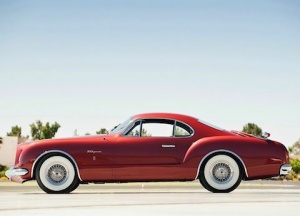 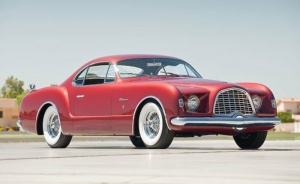 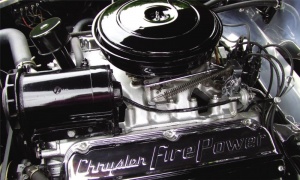 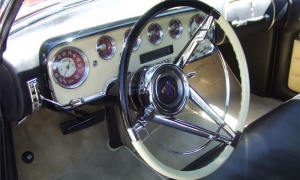 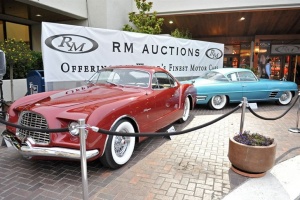 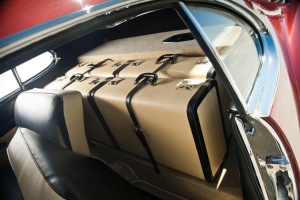 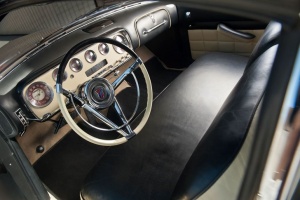 The body was the second built for Chrysler (the first being the Chrysler K-310) by Ghia in Turin, Italy. It was painted a bright Metallic Red, and featured the following:

The black and cream leather interior had a more "all Business" airplane cockpit look than many of the other Exner Dream cars of the time. It was not near as sophisticated as the exterior. Offset in front of the driver was six large gauges -- with a large speedometer on the left, a large clock on the right and fuel, amp, oil and temperature gauges in the center. The dash-mounted gearshift was to the left of the steering column, and a Chrysler push-button radio was to the right. The black and cream colored leather seat was advertised for three (but it was in all reality a 2-seater) with a hidden pull-down armrest. Black leather trimmed the dash. The Interior included a full set of matching luggage, which was stowed behind the seat, as the car lacked a trunk.

The second registered owner, after Chrysler disposed of the car in Italy to avoid tariffs was a man by the name of James Colee. He owned the car from 1955 until 1989 - driving it over 100,000 miles. During that time he installed many engine/transmission combos. They include:

The current drivetrain is a Chrysler 354 Hemi and Powerflite transmission 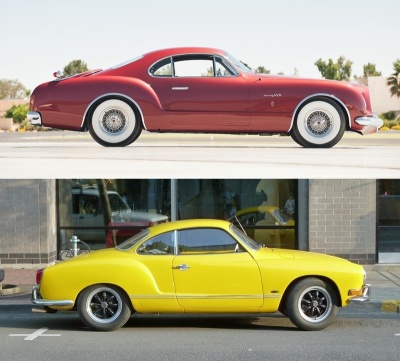 In 1955, Karmann in Germany hooked up with Ghia to produce the Karmann Ghia on a rear engine Volkswagen chassis. The Karmann Ghia was in production, virtually unchanged, into the 70s. Most books on the topic credit the Chrysler D'Elegance as inspiration. There was a lot of screaming about it at the time, but Exner didn't appear to care. By 1955 he was into cars with big fins and he felt the styling to be dated. Additionally, the D'Elegance was in private hands, and Chrysler had long ago stopped showing it. 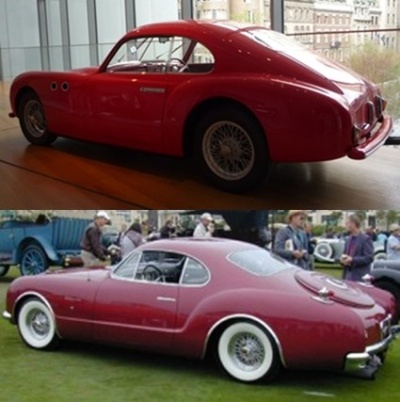 What goes around, comes around. Pininfarina’s 1946 Cisitalia was a beautiful and popular car when first built and shown. Many considered it the single most important car design in the post-war era. The D’Elegance appears similar, albeit more elongated,

The car was unveiled as a 1953 at the Paris Motor Show in October 1952. It was received by the public with great success.

At the 1952 Paris car show, it was rumored that a limited run of 25 cars for Europe. While there, Exner himself, assured everyone that the D'Elegance would remain a one-off.

The rumors that 25 more being built continue to this day. This may have to do with a similar looking Chrysler Dream Car called the 1952 Chrysler Special, later referred to as the Thomas Special. Chrysler's Head of Export Sales was C. T. Thomas. He, independent of Exner, contracted with Ghia to have a pair of "Chrysler Specials" to also be shown at the same Paris Auto Show as the D'Elegance. It was promised that 25 would be made for Export Only Sales. While that didn't come to happen, approximately six were reported to later be built for wealthy Europeans. They're referred to as "Thomas Specials".