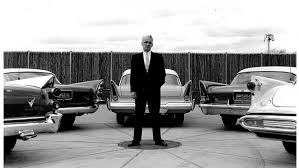 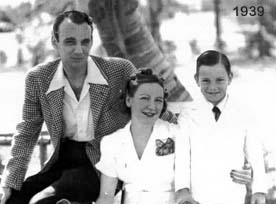 Ex with wife and Son 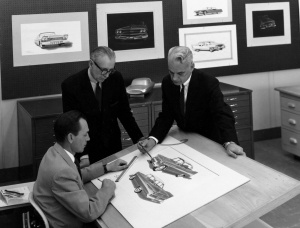 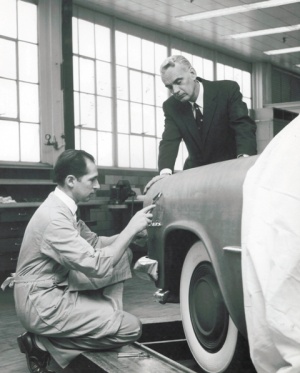 To the most of us MoparStyle kind of guys, Virgil Exner is most famous for his “Forward Look” years at the Chrysler Corporation. I like to refer to him as the “Father of Fins”. However, his auto design career started long before his years at Chrysler – and continued after he left Chrysler.

My research finds that the Ex was born September 24, 1909 in Ann Arbor Michigan, and adopted almost immediately by George and Iva Exner. At an early age, Virgil started to show an interest in athletics and art. When looking at photos of him at any age, you will see that he had a good athletic build – and was very dapper. Exner also showed an interest in cars at a young age, and collected car catalogs. As a teenager, Exner insisted on his friends calling him Ex – as he felt the name Virgil to be too feminine. He attended Notre Dame University for art training but had to drop out in 1928 for financial reasons. He stayed in Southbend, IN (home of Notre Dame and Studebaker) and took a job drawing advertisements for Studebaker. A friend suggested he contact Harley Earl at General Motors, and show him his work. When Harley Earl saw Exner’s work, he hired him to work in the Pontiac design studio.

In 1938, the Raymond Loewy industrial design firm hired Exner away from Pontiac. Ex would work on Studebakers for the next eleven years. Most feel that he was most responsible for designing the 1947 Starlight coupe, despite Raymond Loewy grabbing all of the credit for the design. The 1947 Studebakers were the first Post-WWII American cars introduced to the public. Studebaker’s slogan in 1947 was “First by far with a post-war car”. He was also instrumental in the design of the famous “bullet-Nosed” Studebakers – but did not receive proper credit for that either. I have read much on Raymond Loewy . He and his firm is credited with the late forties and early fifties Studebakers, the 1963 Studebaker Avante, the design of the current Coke Bottle, streamlined trains, streamlined toasters, and the modern look of many items we take for granted today. However, the more I read about Raymond Loewy , the more I find that his talent was hiring the best designers, managing the projects they worked – but taking all credit for their work. Since his company employed the designers, he felt that there was no reason to give credit to others. Many famous designers who worked for Raymond Loewy left for this reason. It is said that Ex and Lowery despised each other.

In 1949, Exner joined Chrysler as head of the Advance Styling Group, where he helped to create “idea cars” like the DeSoto Adventurer, Dodge Firearrow, K-310, Chrysler D’Elegance, Plymouth XNR, and a few others. After World War II, the Chrysler Corporation cars were the stodgiest looking of all American cars. Chrysler’s president, K. T. Keller, insisted that a car’s roofline should be high enough for a man to wear his hat while driving. While the other car companies were making their cars lower and sleeker – Chrysler cars were tall and boxy, costing Chrysler market-share. Directors at Chrysler soon realized that something had to change, and Exner became Chrysler’s first vice-president of styling.

Immediately, Exner designed the production models to be lower, sleek, and tiny fins started to sprout. He referred to this as the 'Forward Look". Ex’s designs combined with Chrysler’s technology (Hemi engines, first alternator, first power steering, shifter on the dashboard – and then later pushbuttons, etc) increased Chrysler Corporation’s market share. Years ago, I read a Studebaker book were it told of how envious Raymond Loewy was with Exner’s success. Legend has it that Loewy made a 1/12 scale clay mock up of a car with gigantic fins. He then sent this mockery to Exner with an insulting note about the design of his cars.

Despite the successes Ex brought Chrysler, Virgil Exner would ultimately become a scapegoat for others at Chrysler’s errors. It started with the cars of 1957, when Chrysler’s rush to manufacturing caused quality issues. The biggest was these cars were rusting fast. Chrysler was due for a major design change for 1962, and the 1961 cars were to be a transition car – taking the cars from fins to the new style due in 1962. Unfortunately, Virgil Exner had a heart attack in 1956 (when the 1961 cars were being designed) – and the 1961 car did not have enough of his direction. Ex returned to work in 1957 and immediately went to work on the 1962 cars.

In the summer of 1959, a Chrysler executive received a tip that Ford and GM were going to downsize their cars dramatically, and executives viewed “Spy Photos” of the downsized cars. There was panic because they were convinced that customers would buy the smaller cars – and not Chrysler’s cars. The designs for the 1962 Chryslers car had already been set – but the directors immediately gave Exner the directive to shorten the wheelbase by three inches and to make it eight inches narrower. Virgil Exner told the directors that doing that to his designs would make the car look like Hell – but it fell of deaf ears.

When the 1962 models of Ford and GM roll out, Chrysler found out that they had been a victim of a hoax by Chevrolet. The car buying public agreed with Exner that just lopping inches off the car would make it ugly – and would not buy them. Chrysler needed a scapegoat, so they fired Ex, and replaced him with Elwood Engel from Ford.

After Chrysler, Ex and his son, Virgil Exner, Jr., designed jet-powered pleasure boats for Buehler Corporation. In 1963, they started working on the idea of bringing back a Neo-Classic Duesenberg. In 1966, they were to have come out with a Duesenberg looking car sitting on a Chrysler drive train, and had actually taken orders for the car -- but at the last minute, a major financier backed out. They were able to, with the help of John DeLorean; produce a Stutz looking neoclassic that rode on a Pontiac drive train.

This article is a condensed version of the dozens of pages I have read on Ex. My personal opinion is that he was one of the greatest automobile designers ever -- but was cheated by Lowery, Chrysler, fate, and history.