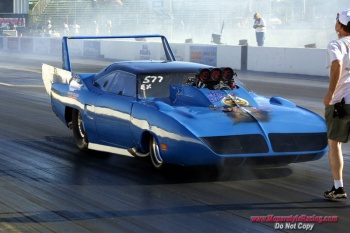 Texas Big Bird was a Petty Blue Plymouth Superbird drag racing car. It was built and competed in the late 1990's by Matt Tolbert of Austin Texas. The body was created by pulling fiberglass molds off a full-size Roadrunner mocked up as a Superbird, and creating body parts to cover a full tube chassis. The car was powered by an Alky 525 CI Hemi with a Kolbelco Blower, built by Indy Cylinder Heads. The transmission was a 3-speed Lenco and the clutch a multi-disc Boninfante.

The car was very popular with the Mopar crowd, and featured in many Mopar magazines.

Matt ran the car in the ProMod class in IHRA in 1999 and 2000, running the quarter in the low 6-second ranger at a little more than 220 MPH range. It was the largest car running ProMod -- mostly competing against much lighter and faster 7/8 scale Corvettes and Camaros. In 2001, Matt put the Texas Big Bird up for sale.

In 2003, with the encouragement of many MoparStyle Members, Dave Schultz bought the car from Matt. Jeff Prock set up and mapped the fuel and blower system, and Monte Smith was the shoe. In 2005, Dave threw in the towel and put the car up for sale after not having any luck finding a sponsor. The car was sold to a Frenchman Herve Caan wanting to run in Europe -- and shipped to Dick Landy to have him go through. The body molds were sold to someone in Iowa -- who has since made a few more bodies. Rumor has it that Caan owed Dick some money -- and so the car was sold to someone in England as a roller and the drive-train going in another direction.

You Tube Video of Car making a pair of 200mph passes