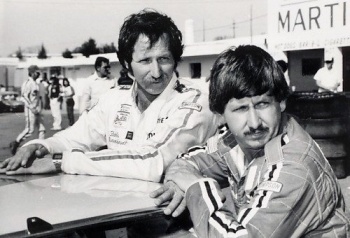 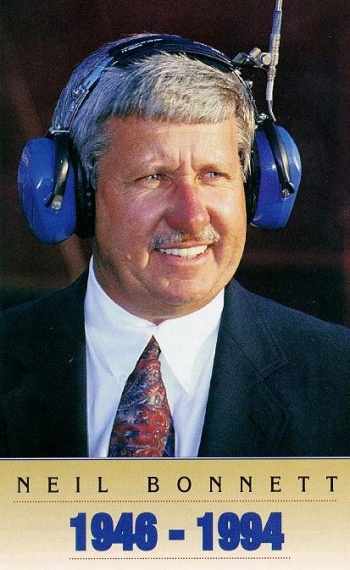 In later years, Neil was a commentator when not racing

Neil earned 18 Winston Cup Series victories during his 18-year career. Among his 18 wins were back-to-back victories in NASCAR's longest (miles) race -- the Coca-Cola 600 (1982 and 1983). He also won back-to-back Busch Clash races at Daytona International Speedway (1983 and 1984). His highest finish in the series points chase was in 1985 when he finished fourth and his teammate, Darrell Waltrip, won the championship. He was an original member of the Alabama Gang that include the Allisons and Red Farmer. Outside the cockpit, Bonnett developed a career as a television commentator for race broadcasts and hosted his own show, "Neil Bonnett's Winners" on The Nashville Network. He was fatally injured in a crash during practice for the 1994 Daytona 500.

Bonnett had secured a ride and sponsorship for at least six races in the 1994 season with car owner James Finch, including the season opening Daytona 500, for Phoenix Racing. On February 11, 1994, during the first practice session for the 1994 Daytona 500, Bonnett's car suffered a right front tire failure in the track's fourth turn. Bonnett's car hit the outside wall nearly head-on. Bonnett was taken to nearby Halifax Medical Center, but he had died on impact. A road called "Allison-Bonnett Memorial Drive" in his hometown honors him, along with fellow native Davey Allison, who died a year earlier.

Neil Bonnett was inducted into the National Motorsports Press Association's Hall of Fame in 1997.