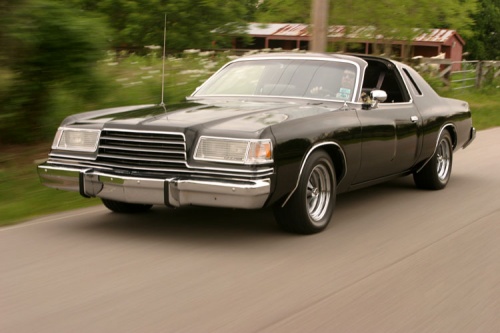 The term "Forgotten B bodies" is a semi-pejorative term that refers to certain Dodge and Chrysler cars built in the model years 1975 to 1979.

These vehicles shared architecture with earlier, mid-sized DCP (Dodge, Chrysler, Plymouth) cars built on the B platform. Examples of B bodies which preceded the so-called Forgotten Bs include, but are not limited to: Dodge Charger, Coronet and Super Bee, and the Plymouth Road Runner, GTX, and Satellite.

Changes in insurance regulations, government mandated safety and emissions regulations, and consumer preferences partially due to rising gas prices precipitated a general shift in the styling, equipment, and marketing of the entire DCP mid-sized lineup for 1975.

No-frills musclecars with high compression big blocks were out, the new low octane unleaded gas that was available made those high compression engines all but unusable. More luxury was being built in. More isolation and insulation replaced driver involvement, a practice which continues to this day.

Government safety standards required front and rear bumpers to be able to withstand a 5mph impact without damage. Rollover standards became more stringent rendering hardtops unfeasible, and thus was born the "opera window". Across the board, automakers ceased convertible production fearing that they would soon be declared illegal. A reasonable fear considering the regulatory climate, however the banning of convertibles never came to pass. Since the last production convertible was built in 1976 (Cadillac Eldorado), there was no need for the feds to pass a law. Fear alone did the deed.

Thus was born a new niche: The Personal Luxury Car. Already a full field with musclecars-gone-lux entries from GM (Monte Carlo, Grand Prix, LeMans, and Cutlass) and Ford (Torino, Cougar, Thunderbird), Chrysler needed a platform upon which to enter the fray. The current B body platform hit all the right notes: 115" wheelbase, leaf-sprung rear and torsion bar front suspension, and adaptable to a variety of engine, transmission, and body combinations. The new Cordoba bodywork was already in the pipeline as a Plymouth, but was ultimately presented as "The First Small Chrysler". Dodge's new entry was called the Charger, a name DCP marketing executives hoped would resonate with former muscle car enthusiasts. A couple of years later Dodge would drop the B body Charger and introduce the Magnum when the 1st generation "late Bs" got their first styling update.

1979 was the swan song for the B bodies, as they were slated to be replaced in 1980 with the new, smaller J platform