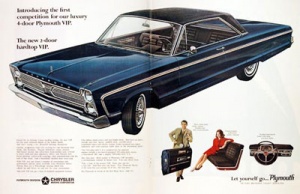 Chrysler's C platform was the basis for rear wheel drive full-size cars from 1965 to 1978. Although often misclassified, 1964 and earlier full-size Chrysler products, and 1973 and earlier Imperials are not C-bodies. For 1979, the C-Body was replaced by the R-Body. There was also a FWD Platform in the 1990's that used the designation of C-Body. It was a variation of the K-Car and discussed there.

Cars using the C Platform include: