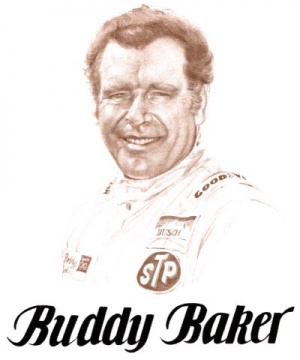 Buddy Baker best know as "Lead foot" or the "Gentle Giant" was known for his record-setting speed over his 34 year career in Winston Cup. In 1970 at Talladega, Buddy became the first driver to run over 200 mph on a closed course, running 200.447mph. This World Record was achieved in the Corporate Blue Chrysler Engineering Dodge Charger Daytona #88 on March 24th., 1970. At the 1980 Daytona 500, Buddy won with an average speed of 177.602mph a record which still stands today.

Buddy Baker was inducted into the Charlotte (N.C) Motorspeedway Court of Legends in 1995 and the International Motorsports Hall of Fame in Talladega, AL in 1997.

Buddy Baker drove Dodge Chargers in the mid to late 60s and early 70s, until Mopar pulled out of NASCAR. 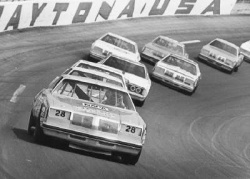 Buddy Baker drove one of the fastest and scariest cars in NASCAR. It was called the "Gray Ghost". The reason it was given that name was because the car would come up behind other drivers and it was hard to see because it would blend in with the track. The gray part of the car which was the hood, top and rear deck-lid blended in with the speedway. The sides of the car was black so that didn't help either. When the other drivers would look in their mirrors they wouldn't see it coming and all of a sudden, it was like an explosion when the car went by because of the speed it generated.

NASCAR officials finally made Baker put Day-Glo strips on the front of the car so it could be seen in the rear view mirrors of the other drivers. It was the Gray Ghost Baker drove to victory at the Daytona 500, his only victory there. Some of the drivers complained to NASCAR, thus the reason why the strips were ordered to be put on it. 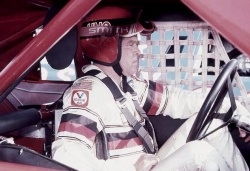