From MoparWiki
(Redirected from 1956 Chrysler Norseman)
Jump to: navigation, search 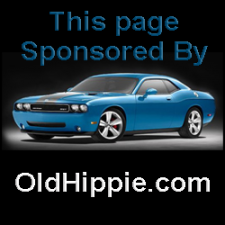 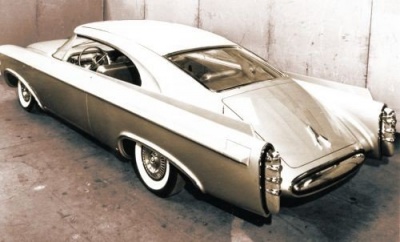 Norsemen were a group of people who lived between the 8th and 11th centuries and who spoke what is now called the Old Norse language. Norseman means "man from the North" and applied primarily to Old Norse-speaking tribes living in southern and central Scandinavia. However this wiki is about the 1956 Chrysler Norseman Dream Car. After a few years of development prototypes and low-volume specials, Chrysler finally commissioned Ghia to build a full show car in 1956. The Chrysler Norseman was to be "the most automated car in the world".

When Ghia was fished building, the car was carefully packed into a wooden crate and loaded on the Italian Luxury Liner SS Andrea Doria for its cross Atlantic trip to New York. The ship collided with the Stockholm 40 Miles off the coast of Nantucket, and it sank 11 hours later. At the time, Virgil Exner was in the hospital recovering from a heart attack. Associated Press' summed up the loss of the Norseman short and sweet by reporting:

The experimental car was built for Chrysler in Turin, Italy, and was being shipped to the United States for public showing. A Chrysler spokesman said Friday the Norseman cost about $200,000, including a year's engineering work. It was insured.

There has been a dispute on the colors as only a few photos, and none in color, exist of the car. Exner ordered the car to be Silver, those seeing it being loaded on the ship say it was a tu-tone blue with red interior, and others at Chrysler say it was tu-tone Green with green and gray interior.

There was a brief consideration was given to building a second Norseman, but the time needed to do this would have meant the car would not be available until late 1957 or early 1958. The fast pace of auto design would have rendered a second Norseman as obsolete by the time it was ready, so that idea was nixed. 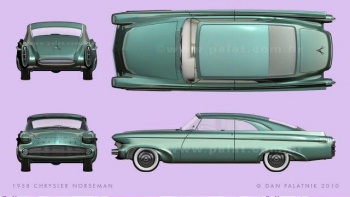 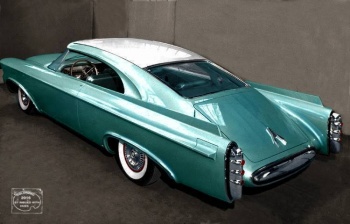 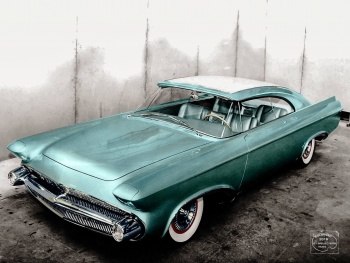 Cliff Voss and William Brownlie under the direction of Virgil Exner

The chassis was a modified 1955 Chrysler. Suspension was torsion bars in front and leaf springs in back. Torsion bars were employed for the 1957 Chryslers, so the presence of the setup on the show car seems logical. The wheelbase stretched from 126 to 129 inches and had a full under pan to reduce under car air resistance. 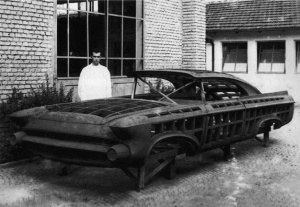 The most unusual feature of the Norseman was its cantilever Fastback roof. The roof was made of a special glass by PPG for strength in a rollover, and 1/4" steel rods in place of the A-Pillars. In theory the rods were to break and cause the roof to snap back in the event of a roll over. Additionally, the roof had a couple of novelty features. One was a brushed aluminum insert and the other was a 12-square foot backlight that could be retracted forward into the roof via an electrical switch. Fresh air intakes for the passenger compartment were located in the leading edge of the roof, too.

50,000 man-hours and approximately $150,000 to design and build the Norseman. Body panels were hand formed aluminum over wooden bucks. Ghia required 15 months to construct the car. The front view featured Clamshell style hidden headlights with a full-width concave grille. A thin bumper located along the horizontal center line was capped at each end with pod-mounted parking lights. There was a valance panel underneath the assembly. The look of the front resembled the nose of a shark.

The body also featured circular rear wheel openings, much like the Limited Production Buick Skylark. The car was devoid of door handles, and instead had push buttons like the '40s Lincoln. The view from the rear of the Norseman was also sensational. Other than its retractable backlight, this show car also featured elliptical nacelles housing chrome-plated bumperettes each with small, round stacked taillights. The fin on the driver’s side ended with the fuel-filler door. 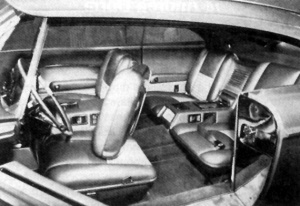 The leather interior of four bucket seats and futuristic gauge pods -- with some type of luminescent paint on the back of the front seats for a lighting experiment.

Inside the Norseman were even more spectacular features. Its seating consisted of four power-assisted bucket-type seats covered in metallic light green leather with either contrasting gray or gray-green inserts. Each pair of seats was separated by a console with a glove box. Also incorporated into these consoles was a retractor for the buckle component of the seat belts; the other half of the reel-type seat belts retracted into the side of the front seats and probably the quarter trim panels in back. Interior lamps also appear to have been installed within the individual consoles. An experimental form of lighting was luminescent paint applied to the back side of the Norseman's front seats. Instrumentation was suspended from the padded dash in pods and a small writing desk could be pulled out from underneath the passenger side glove box. Satin finish metal trim wrapped around from the door panels to the dash.

Power came from a 331 CI Hemi rated at 235hp, with a 2-speed Powerflite transmission, and shifted by push-buttons.