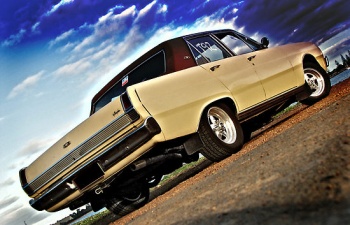 The VIP was released by Chrysler Australia Ltd to fill the gap in the model range between the Australian built Valiant/Regal and the imported (locally assembled from CKD) Dodge Phoenix.

Its direct competitor was the Australian built Ford Fairlane and GM Holden Brougham released in July 1968.

The VIP was a model built by Chrysler Australia Ltd and was manufactured between 1967 and 1971 and spanned three models.

The first model VIP was introduced on October 1967 and was based on the standard VE Valiant A-Body 108 inch wheelbase but had options not available on the regular Valiant and Regal models. It came with a 273cid V8, Torqueflite automatic transmission with center console shift, coaxial power steering and power assisted front disc brakes as standard. They also had vinyl roofs and dress rims as standard. Being built on the same wheelbase as the standard Valiant put it at a disadvantage to it's main competitor the Ford Fairlane which had a stretched Falcon platform.

It was advertised as 'The special car for Very Important People'.

In addition to the four door sedan a station wagon variant called the Safari VIP was also available but had a column shift rather than center console shift automatic transmission.

The VF Chrysler VIP was released in May 1969 with a stretched 112 inch wheelbase over the standard Valiant. The decision was made to market and badge the VIP as a Chrysler rather than a Valiant. Unlike the previous VE model the VF VIP received it's own exclusive quad headlight grille and revised tail lights to distinguish it from the standard Valiant range. The VF VIP was also available with a 225cid slant six in addition to a new 318cid V8. The VIP wagon was dropped when the VF model was introduced and was only available as a four door.

The VG Chrysler VIP was released in 1970 and became available with the all new Australian 245cid Hemi straight six in addition to the 318cid V8. In 1970 the VIP became the first Australian car to be fitted with air conditioning as standard.

The VIP was replaced by the 115 inch wheelbase CH Series Chrysler by Chrysler released in November 1971.