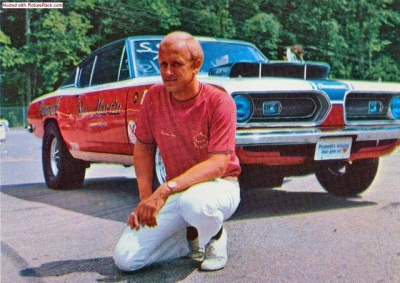 Long Regarded as the greatest of the four speed drag racers, Ronnie Sox won many NHRA and IHRA Championships and was the AHRA's Driver of the Year in 1968. He was the "Sox" part of the famous Sox and Martin team, with partner Buddy Martin.

Ronnie started racing at the local tracks in North Carolina in the 1950s, driving a Chevrolet. He switched to Mercury in the early 60s, but is most known for being a Plymouth sponsored driver, where his razor sharp shifting of the 4-speed gave him the arguably reputation of being the best. When a rule change allowing the clutchless Lenco transmission was made in 1973, Ronnie Sox was virtually the only driver to lose ground (.04 seconds), thus taking away his edge.