The Chrysler Royal is a full-size car that was produced by Chrysler. The Royal name first appeared in 1933 as the model name for the CT series. 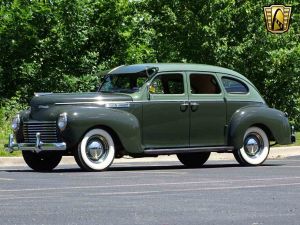 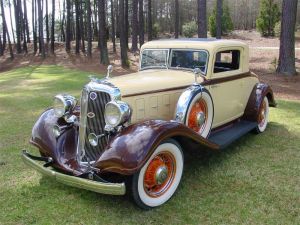 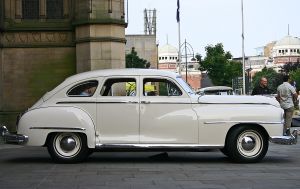 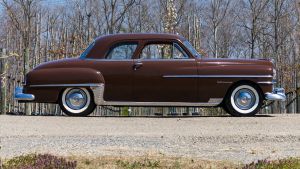 The Royal was originally installed with the Chrysler Straight Eight, and it was the second Chrysler to use a nameplate that didn't refer to a "Series" designation that referred to a internal body code or the speed it was capable of in past products. The first Chrysler product to do so was the Imperial, which it originally shared a shortened chassis. The Royal offered sweeping fenders, rear suicide doors, dual windshield wipers, dual taillights and dual chrome trumpet horns, sharing an appearance with the 1933 Chrysler Imperial Series CQ. Prices ranged from US$895 ($17,893 in 2020 dollars) for the business coupe to US$1,085 ($21,692 in 2020 dollars) for the convertible sedan.

The "Royal" nameplate was used for one year in 1933 when the Airflow replaced the Royal in 1934, then brought back in 1937 when the Airflow sold poorly, and was sold alongside the Airflow which continued to offer the Chrysler Straight Eight. A November 1936 advertisement listed the 1937 Royal as available in ten body types, starting at US$715 ($13,335 in 2020 dollars), with the four door sedan at US$815 ($15,200 in 2020 dollars). The 1937 Royal Series C-16 was installed with the Chrysler Straight Six and took the entry-level position in the Chrysler hierarchy, while being shared with the DeSoto Airstream. In 1939 the Series C-22 Royal introduced the "Royal Windsor" nameplate as a trim package, then in 1941, the "Royal", "Windsor" and "Highlander" became separate nameplates sharing the same wheelbase but only using the Straight Six, with "Windsor" models offering more standard features and a higher standard interior over the "Royal".

The Royal remained the 6-cylinder entry-level model for Chrysler until it was dropped at the end of 1950 model year, making the Chrysler Windsor the entry-level car for the 1951 model year. Pre-war models were offered in two wheelbase lengths, with coupes and sedans available on the shorter wheelbase, while seven-passenger sedan and limousine were offered on the longer wheelbase.

The Royal name was revived by Chrysler Australia in 1957 for an Australian produced model based on the 1953 Plymouth. The "royal" model name was also revived for the 1955 North American Dodge Royal.

The name was later applied as a trim level of the Chrysler Newport from 1970 to 1972; this would be its last use on any Chrysler branded vehicle. It was used on Dodge Ram pickup trucks and vans until the early 1990s.

Change the Category below the Comments to the appropriate category(s). In the special pages you will find a link to the list of categories.