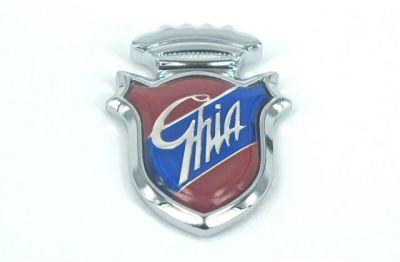 Carrozzeria Ghia SpA (established 1916 in Turin) is one of the most famous Italian automobile design and coachbuilding firms, established by Giacinto Ghia and Gariglio as Carrozzeria Ghia & Gariglio, located at 4 Corso Valentino in Turin, Italy.

Ghia initially made lightweight aluminum-bodied cars, achieving fame with the Alfa Romeo 6C 1500, winning Mille Miglia (1929). Between the world wars, Ghia designed special bodies for Alfa Romeo, Fiat, and Lancia, one of the most famous was the Fiat 508 Balilla sports coupe (1933). The factory was rebuilt at Via Tomassi Grossi, after being demolished in an air raid during World War II (1943). After Ghia's death (1944), the company was sold to Mario Boano and Giorgio Alberti. The Ghia-Aigle subsidiary was established in Aigle, Switzerland (1948).

Following differences between Boano and the company's Naples-born chief engineer and designer Luigi Segre, Boano left the company in 1953 and ownership passed to Segre in 1954. Under the ownership of Luigi Segre,• between 1953-1957, Giovanni Savonuzzi became Direttore Tecnico Progettazione e Produzione Carrozzerie e Stile and established GHIA as the most influential proponent of that Italian styling that came to define automobile design trends world wide.[2] the decade between 1953 and 1963 saw many foreign firms ordering Ghia designs, such as Ford (the Lincoln Futura concept car), Volkswagen (the Karmann Ghia), and Volvo (the Volvo P1800). Chrysler and its designer Virgil Exner became a close partner for 15 years, resulting in eighteen Chrysler Ghia Specials (1951–53), the K-310, the Chrysler Norseman, the Imperial Crown limousines (Jackie Kennedy, Nelson Rockefeller, and other luminaries owned one), and others. There are even a few Ghia-bodied Ferraris. Ghia also participated in the short-lived Dual-Ghia venture. Production by Ghia was always in very low numbers, giving the company's products even greater exclusivity than those of the other Italian coachbuilders.

In 1953, Boano left for Fiat, the factory moved to via Agostino da Montefeltro, and Luigi Segre took over. Ghia then brought in Pietro Frua, appointing Frua as head of Ghia Design (1957–60), designing the Renault Floride. After Segres death (1963), Ghia was sold to Ramfis Trujillo (1966), who sold to Alejandro de Tomaso (1967), owner of a rival design house, who took over, but had difficulty in running Ghia profitably. In 1970, he sold his shares to the Ford Motor Company. During this transition period, Ghia had partial involvement in the De Tomaso Pantera, a high-performance, mid-engine car utilizing a Ford V8.