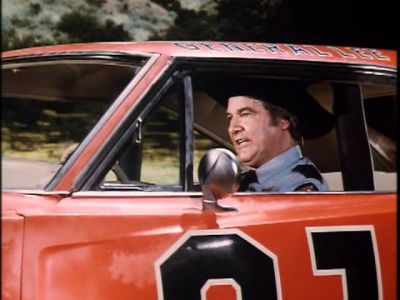 Rosco Purvis Coltrane is a fictional sheriff character who appeared in the 1975 film Moonrunners, which inspired the creation of the TV show American TV series The Dukes of Hazzard (and related spin-off films).

In Moonrunners, he was played by Bruce Atkins. The role of Rosco in the television series (and a much more detailed character than the one in Moonrunners) is the right-hand man of Hazzard County's corrupt county commissioner, Jefferson Davis "J.D." Hogg ("Boss Hogg"); he was played by James Best, who had appeared in many films and TV series before landing the role. He appeared in all but five episodes. He was accompanied on the show by his character's pet/police dog (beginning in season 3), a basset hound named Flash.

Rosco's name is sometimes spelled with an E, which is incorrect; James Best corrected this popular misconception on his website. As in Moonrunners from which The Dukes of Hazzard TV series evolved, in the first season the character's name is given as "Rosco Coltrane". The initial "P." was added from the start of the second season, after Best convinced show producers that it gave him more to play with vocally when pronouncing it. The "P." stands for Purvis. 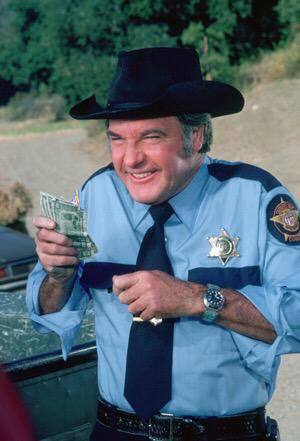 Rosco happy with his graft & corruption 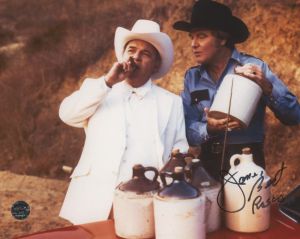 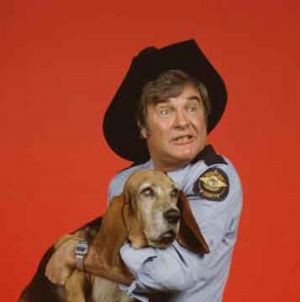 Rosco in The Dukes of Hazzard

In early episodes, the character of Rosco was a serious one. He is depicted as a hard-nosed, focused, and aggressive sheriff, and actually shot a criminal (not fatally) in an early episode ("Mary Kaye's Baby", the third episode broadcast). He was a willing accomplice to Boss Hogg's schemes, and also appeared to have the ingenuity to arrange such schemes himself (in the pilot episode, "One Armed Bandits", for example, he seems to be the key organizer behind the illegal importation of slot machines into the county). The "One Armed Bandits" episode also explained that Rosco had served Hazzard County for 20 years as "a fairly honest lawman" but became embittered after his pension was wiped out following a failed bond referendum, and with just a few months left in office he was forced to run for re-election instead of retiring. This notion was explored again in a couple of other early episodes, most notably a scene where Deputy Enos asks him why he became so corrupt, in the fourth broadcast episode, "Repo Men". When series creator Gy Waldron realized that the series had become very popular with young children, the character was toned down to the more comedic and more bumbling persona for which he is best known, a characterization that Best himself largely created. He never wanted children viewing to feel afraid to approach a police officer when in need.

Rosco frequently initiates car chases with Bo and Luke Duke (Hogg's most frequent adversaries), but the Duke boys are usually able to elude Rosco, who frequently wrecks his patrol car in various ways.

Starting with the third season (1980–1981), Rosco got a pet dog—a lazy basset hound he calls "Flash" and nicknames "Velvet Ears" which he dotes on. Flash liked the Dukes but always barked at Boss Hogg. Early on, the dog's gender was male, but this would change in later episodes.

Boss Hogg and Rosco are brothers-in-law because Rosco's older sister, Lulu, is married to Boss Hogg.

Rosco has just more than $43 in his savings account, and often tries to join Boss in indulging in high-calorie dishes (which usually results in him getting his hands slapped). His patrol car (in the first season a 1974 Dodge Monaco or a 1970 Dodge Polara (first two episodes), 1974–5 AMC Matador, and 1976 Plymouth Fury. In later seasons a 1977 or 1978 Dodge Monaco or Plymouth Fury) which also serves as his daily driver except for a few episodes where he has other cars, such as a 1977 Pontiac Lemans in the 3rd season episode "To Catch a Duke" which he apparently saved his nickels and dimes for, as he claims. This car can routinely be seen parked outside the Police station in stock footage exterior shots for the rest of the series. His personal vehicle in the 5th-season episode "The Revenge of Hughie Hogg" is a 1967–1968 Chevrolet Impala which he kicks apart. Rosco carries a pearl-handled Smith & Wesson Model 15 (a Smith & Wesson Model 10 in the pilot episode, and also the opening credits for the show), with which he is an expert shot, although when he has to use it in the line of duty, he gets too nervous to hit anything (the exception being the first-season episode, "Mary Kaye's Baby" when he shot a criminal in a shoot out). His main deputies—whom he often calls "dipstick"—include Enos Strate and Cletus Hogg. Although he often henpecks and belittles his deputies, he also shows great concern when they might be in real danger.

Rosco's mentality is that of a clumsy, somewhat slow-witted buffoon. He speaks often with a childish vernacular and repeats his favorite catchphrases constantly. One that has always been featured when Rosco arrests the Duke boys or anyone else for that matter is "Cuff 'em and stuff 'em!" One aspect of Rosco's personality that was well-loved and became synonymous with him was a choppy and excited chuckle that was produced from the back of the throat ("Kew-kew-kew-kew!") and became one of the most recognizable aspects of the character (a clip of this laugh was played over the closing Warner Bros. Television logo on the end credits for most episodes, though it sometimes alternated with a clip of Boss Hogg yelling "Them Dukes, them Dukes!"). He is easily excitable and genuinely enjoys law enforcement, especially chasing criminals, which he refers to as "hot pursuit".

Rosco was married briefly in an episode, "Mrs. Rosco P. Coltrane", during the third season (1980–1981), to a woman he purportedly met through a computer dating service, but the marriage was a sham—his "bride" robbed banks with her husband and his associate — and the union was quickly annulled. This episode was also the only episode to feature Rosco's mother, and the only episode to reveal that the initial 'P' stood for Purvis.

Rosco has shown on numerous occasions (especially on episodes where characters either were thought to have died or found themselves in serious trouble) that he is much more of a caring man than he ordinarily lets on. This is particularly clear when the safety of his best friend Boss Hogg is threatened by somebody.

During the second season (1979–1980) of the series, James Best left over a dispute about the changing-room conditions. His gripe was that he did not mind getting soaked or covered in mud when filming Rosco crashing his car into rivers and such, but was unhappy with the poor changing facilities afterwards. During his absence, Rosco was replaced by a number of stand-in sheriffs (played by such actors as James Hampton and Dick Sargent). Eventually the dispute was settled, and Best returned as Rosco, remaining for the rest of the show's run.

Following the death of actor Sorrell Booke who played Boss Hogg, the first reunion film also showed that Boss Hogg had died. Rosco inherited his money (and documents of dirty schemes) and he also became Hazzard County's Commissioner as well as serving as Sheriff.