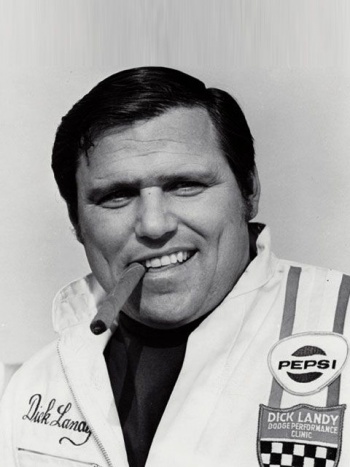 "Dandy" Dick Landy in his prime 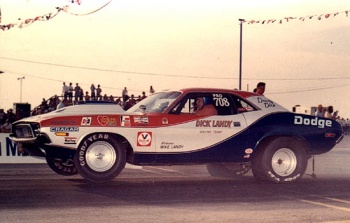 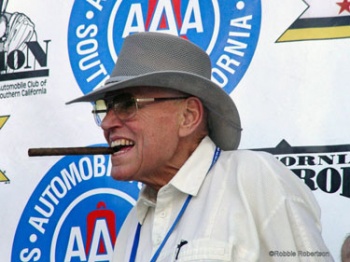 Dandy Dick in his later years

"Dandy" Dick Landy was a master showman and a major pioneer in Super Stock, Funny Car, and Pro Stock; who was known for his innovative race cars, wild wheelstands, and his trademark cigars. His nickname "Dandy" came from his neat appearance in pressed white pants and jacket and long unlit cigar clenched between his teeth.

Landy was among the drivers who popularized late-model Super Stock cars in the 1960s, campaigned the first Funny Cars in the middle of that decade, and helped establish the popularity of Pro Stock when the category was created in 1970.

Landy made a name for himself and his factory sponsor by combining the legendary Hemi with an altered wheelbase to create the first "Funny Car". The combination of horsepower and traction led to the banning of his vehicles by the NHRA; relegated to the exhibition circuit, Landy then introduced nitromethane, mechanical fuel injection, and supercharging to the equation and established the foundation for the highest tiers of modern drag racing. Landy later returned to the world of officially-sanctioned racing to participate in the formative days of the Super Stock and Pro Stock classes, and remained involved with Chrysler for the remainder of his long career.

In 1964 Dick Landy was among the first to get one of the few factory built 426 Hemi cars from the Chrysler Corporation. In the fall of 1964, Chrysler was building 1965 production cars and several special race cars known as the “A/FX’s.” Because of the alterations Landy had made, (like moving the rear axles forward 15 inches and the front wheels 10 inches), he and his “Landy’s Dodge” were kept out of NHRA competition. However, Dick Landy and his car quickly became a crowd favorite at match races from coast to coast. These were at first called “altered wheelbase” cars but soon were nicknamed, “[[funny car]s” because of their odd appearance. Dick Landy’s 1964 Dodge was out months before the factory’s and since he was racing first, it could easily have the title of “The First Funny Car.” In 1968, Dick Landy earned the “Car Craft Magazine All Drag Racing Award.” And according to Dick “the ’68 Charger was a flat out winner!” Dick Landy won the AHRA Winternationals with a time of 10.49 seconds and a speed of 133.25 MPH.

Landy maintained his ties with drag racing through Dick Landy Industries, a research and development company in Northridge, California. DLl provided high performance parts for a number of manufacturers, including DaimlerChrysler and Mopar Performance. DLI was closed shortly after Dick Landy's death. There has been reports of the fraudulent use of Dick Landy's name and DLI, and the family maintains that while they may in the future be again involved in the automotive industry -- that the business was closed and not sold.