From MoparWiki
(Redirected from A108)
Jump to: navigation, search 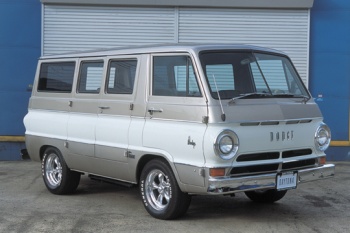 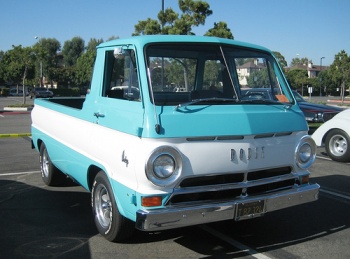 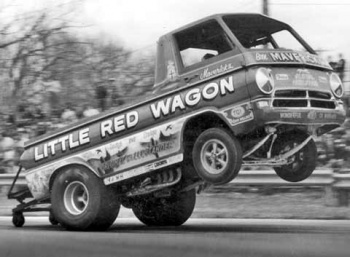 A-100 and their stretched A-108 sisters were Forward Control Vans and trucks were sold by Dodge in the US and Fargo in Canada.

Plymouth Suburban Panel Trucks and Dodge Pick truck previously were called on to handle the jobs done by A-100s -- but there was no real direct predecessor.

Sold as Fargos in Canada

The A-100 Forward Control truck was a direct response to Ford's Econoline truck and Corvair's Rampside truck -- which in turn were a response to the Volkswagon Forward Cab Van and Pickups. While a little late in the game (Introduced in 1964) and didn't sell as well as the Ford - the Dodge Version was the best. The stretched A-108 Version came out in 1967. In 1965, with the introduction of the 273ci V-8, Dodge was the only Cab Forward pick up with an 8 cylinder engine. The A-100/A-108 trucks came in 3 window and 5 window versions.

Maybe the most popular of the A-100s ever built, was Bill "Maverick" Golden's Little Red wagon Wheel Stander.

The only transmissions available were either a three-speed manual or an automatic.

Production was 35,535 built with the Slant Six and 5,810 build with the 273CI V-8. Total includes 3 and 5 Window pick ups, Panel van, Vans with side doors, Sportsman Vans and the more upscale Custom Sportsman.

1967 saw the introduction of the A-108, which rode on a 108" wheel base vs. the 90" of the A-100. It also saw the availability of the new 318 LA V-8 engine. Some other changes for this model year were safety padding on the dash and sun visors, a dual master brake system and a custom package that included rear quarter windows, chrome hubcaps, a cigar lighter, and additional interior trim pieces. The rear quarter windows were also available as a stand-alone option.