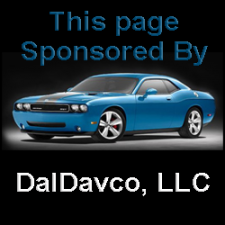 Walter P. Chrysler was a native of Kansas, and cut his teeth on railroading. He was the son of an engineer on the Kansas and Pacific Railroad, and was always fascinated by machinery. As a young man, he built his own working railroad model, machining his own tools in the process. When he was 17, he signed on at the Union Pacific shops as an apprentice, for a nickel an hour. Mechanical engineering became young Walt Chrysler's life, not his profession.

After he got his journeyman's certificate, he took a job in the Rio Grande & Western roundhouse in Salt Lake City. He got married and began studying with the International Correspondence School. He steadily moved up through the industry.

After a bit of time, the superintendent of motive power of the whole Chicago & Great Western system was a new man named Chrysler. "W.P." they called him. During his Great Western period Mr. Chrysler lived in Oelwein, Iowa. His mechanical curiosity was piqued by the new ‘horseless carriages’ he’d see traversing the town streets.

He went to the 1905 Chicago automobile show, where he saw a beautiful auto that he had to have. It was called a ‘Locomobile’. The price was $5,000 cash. Chrysler had only $700 in the bank, but that did not hold him back. He borrowed $4,300 and shipped it home. He spent months with his first car, tearing it down and reassembling it several times before he even learned to drive it! Chrysler decided that when the time was right, he would need to improve these things.

At 33, machinist/manager WP joined on with the American Locomotive Company, where he swiftly rose through the ranks. He was assigned to the position of Assistant Works Manager at the sprawling ALCO Pittsburgh plant, which he quickly transformed into a moneymaker. It was in this position that WP was first noticed by one of the directors of ALCO, James J. Storrow, who would soon the president of General Motors.

James Storrow, the president of GM, remembered the young Chrysler, and introduced him to Charlie Nash, then the president of Buick. After touring the Buick works, Nash could offer WP only $6000 a year, half of WP’s $12000 a year ALCO salary. Chrysler did not even hesitate! He immediately accepted the Buick position.

It was 1911, and Walter P. Chrysler was in the automobile business!

Over the next few years, WP built Buick into a power to be reckoned with, with Nash at the helm. In 1916, however, William Crapo Durant used the power of his upstart Chevrolet Company to leverage the presidency of General Motors. Nash would not be welcome under Durant, and Nash and Chrysler were a team.

Nash purchased another auto manufacturer, in Kenosha, Wisconsin, and created the Nash Motors Company, which would later become American Motors. It was assumed that Chrysler would join him at the helm of this new company.

Durant had other ideas, however. He offered WP a salary of $10,000 a month, plus a yearly bonus of half-a-million dollars, in either GM stock or cash. Chrysler accepted, on the condition that he be allowed to run Buick with no interference from other GM companies. WP was now the president of Buick Motors, a job he would hold until 1919, when friction between Chrysler and Durant would come to a head. By 1919, WP had earned $ 10 million worth of GM stock, which he surrendered to GM for cash. Chrysler would eventually use this money to seed his own automobile company.

The only thing WP Chrysler lacked at this time was experience in automotive finance. In 1920, Willys-Overland found itself in financial trouble. John N. Willys had created Willys Corporation as a holding company and proceeded to acquire such firms as Wilson Foundry, Curtiss Aeroplane, Moline Plow, Electric Autolite, New Process Gear. Chase Securities Company had millions tied up in the Willys situation, and hired Walter Chrysler to get their money back.

WP thus became executive vice president at a salary of one million a year. While there, Chrysler came across plans to develop a new Willys Six at the former Duesenberg plant in New Jersey. After determining the new car was inferior to its proposed competitors, Chrysler ordered a new car be developed. To head the new project, Carl Breer, Fred Zeder and Owen Skelton were hired. The new car was to be the Chrysler Six. The Willys Corporation went into receivership in 1921 and Chrysler tried to purchase the plant and car at a receiver's sale but was not successful. W.C. Durant had the successful bid and the new Chrysler Six was reworked to become the Flint 55.

During the same time period, WP agreed to help Chase Securities at Maxwell Motor Company, a firm that owed Chase $26 million. Chrysler improved the Maxwell, there were thousands of unsold cars, and sold them off at a profit of $5 per car. Maxwell and Chalmers were merged into one firm and WP became president of the new firm in 1923.

During 1923 Breer, Skelton and Zeder were hired to develop a new car to replace the Chalmers. The result was the Chrysler Model B, appearing in January, 1924. It was dubbed the Model B in memory of the stillborn Chrysler designed at Willys.

In early July of 1928, Walter P. Chrysler offered the public a new automobile called the Plymouth and new six cylinder car, the DeSoto, priced just above the Plymouth. At the end of that same month, Dodge Brothers was acquired from Dillon, Read and all DB stockholders. Dodge Brothers, Inc, included Graham Brothers, a large truck company. Almost incidentally, he brought out a new line of commercial cars--the Fargo "Packet" and "Clipper”, based on Plymouth and DeSoto mechanicals.

Early in autumn of 1928 came the news that Walter P. Chrysler was going to build the world's tallest skyscraper, a 68-story colossus towering more than 800 feet above Manhattan. When it opened to the public on May 27, 1930, at 405 Lexington Avenue, the Chrysler Building was the tallest building in the world. This only lasted for several months until the Empire State Building was completed

During the Great Depression of the 30’s, while many other companies would fail and disappear forever, the Chrysler Corporation would not only survive, but thrive. Chrysler did this by dropping the prices of his cars, selling them at for only a small profit. He also had maintained the research and development that made Chrysler products famous during these lean times. 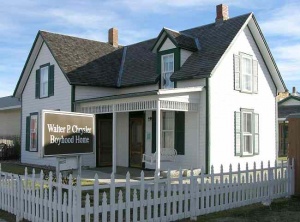 Walter Percy Chrysler was born on April 2, 1875, in Wamego, Kansas. When he was 3, Walter's family moved to Ellis, Kansas where his father worked as an engineer with the Kansas Pacific Railroad. Walter went through school in Ellis and became a machinist's apprentice for the then renamed Union Pacific Railroad.

Union Pacific shops as an apprentice

Chrysler would stay on as president of the company he founded until 1935, when he turned over the reins to K.T. Keller, an able machinist and manager that Mr. Chrysler worked with during his years at Buick.

The automotive world had lost a one of its greatest personalities, but the company founded by Walter P. Chrysler would continue to grow and thrive for many years. 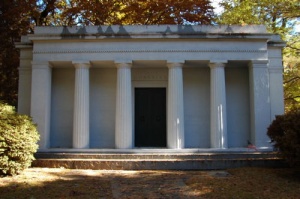 On May 26, 1938, Walter P. Chrysler suffered a stoke at his King's Point home on Long Island, New York. On August 8, 1938, Della Chrysler had a cerebral hemorrhage and died at 7 p.m.. She was buried in Sleep Hollow Cemetery in Tarrytown, New York. Soon after her death Walter began building their Greek-styled mausoleum. On August 18, 1940, Walter P. Chrysler died as a result of his second stroke on August 15th. His funeral was held on Wednesday, August 20, 1940. at 11 p.m. He was buried in their mausoleum, in Tarrytown, New York.