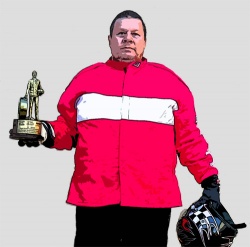 BK Holding the Wally he Won At Lonestar Shootout 2012 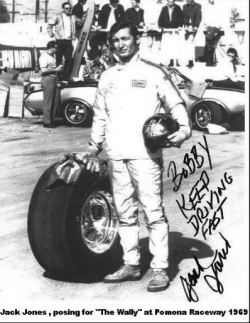 Jack Jones is the Image used on The Wally

The Wally is the trophy awarded to winners of an NHRA national event. They have been handed out at national events starting with the 1969 NHRA race season. With an antique brass plating over a standard metal mix and a solid walnut base, the "Wally" (named after NHRA founder Wally Parks) is 18 inches tall and weighs 12 pounds. Contrary to popular belief, the Wally trophy does not feature Parks himself, but is rather modeled after Top Gas racer Jack Jones.[1]

In the June 30, 1995 issue of National Dragster, Jack Jones said, "Believe it or not, Wally Parks called me at my job and asked if I’d do him a favor, pose for pictures that would be used as models for the trophy." The Wally was modeled after the images taken of Jones during a photo shoot at Pomona Raceway in California in 1969.[4]