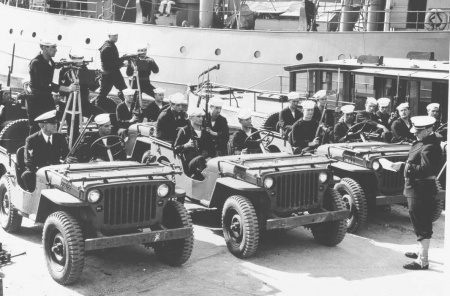 World War I started the age of mechanization of the US Army. The Army bought many vehicles from many vendors to move men and materials from location to location. By the middle 1930’s the Army realized the logistical nightmare causing maintenance and supply issues caused by having so many vendors and vehicle types. The desire to standardize on a smaller group of vehicles led to the search for smaller, faster easier to maintain vehicle.

The army tested several vehicle concepts over the years, including a vehicle dubbed the “Belly-Flopper”. The “Belly-Flopper” was designed much like a cross between a kid’s sled and a go-cart. The driver and a passenger lay on their stomachs to drive the vehicle, unseen by the enemy. The specifications for 70 units of a test vehicle were sent out on July 7, 1940, called for:

Only three companies, of 135 invited to bid, responded to the contest, Ford Motor Company, Willys-Overland (pronounced Willis-Overland), and American Bantam Car Company and of these, the Bantam Car Company was the most aggressive. They had their blueprints of their vehicle into Washington in 5 days. Bantam delivered a prototype by the September 23, 1940 deadline. With war breaking out in Europe, both Ford and Willys were allowed to submit vehicles for testing. Both of these competitors were also given access to the Bantam plans, explaining the look-alike similarities of the three prototypes. The Army ordered a total of 1500 of each vehicle for further testing and early 1941 saw these vehicles entered into Army inventory. Willys and Ford received the contracts to actually build the vehicles based on Bantam’s designs, as Bantam didn’t have suitable manufacturing facilities. Bantam did get the contract to build the trailers need for the vehicles. Both the Willys and Ford parts were interchangeable.

The name Jeep is said to derive from several sources. Some say the name came from the GP (General Purpose) designation, others say it came from the cartoon character “Eugene, the Magical Jeep” from the Popeye cartoons. Eugene had the ability to go anywhere (by magic of course), as did the Willys vehicle.

The Jeep became the vehicle of choice for the Army and it was said that the little vehicle could move faster than a tank and go places that tanks couldn’t go. The Jeep (both the Willys MB and Ford GPW) proved to be a reliable, well made vehicle, impressing soldiers who both drove and maintained the vehicles. It was said at the time that Jeep won the war.

After the War, as soldier were returning home, many wanted a Jeep of their own. Willys, seeing a demand for the Jeep trademarked the name, for its line of vehicles based on the venerable vehicle.

The Jeep CJ-2A (Civilian Jeep 2A) was introduced in late 1945, and was mechanically identical to the MB that was produced for the Army, but with a few differences, such as chrome trim and larger headlamps. The fuel tank intake was on the left side panel, and the spare tire was moved to the rear tailgate. The rear panel also became a flip down tailgate. The first year saw only 1,824 units made, but the end of production in 1949 produced a total of nearly 137,000 units.

The postwar years were good to Willys and they built other vehicles on the Jeep name and toughness, including the Willys Jeep Wagon (1946 to 1963), the Willys Jeep truck (1947 to 1963), and the Willys Jeepster (1948 to 1950). The wagon and truck were available in 2-wheel and 4-wheel drive models. These models were intended to bring the Jeep brand to younger, trendier owners, expanding the market for Jeep. Willys continued with updating the CJ series of Jeeps and all through the 50’s.

For 1952 Willys introduced a new compact car, the Aero, the work of engineer Clyde Paton. The car used four and six cylinder engines used in various Jeep models. Sales were good in 1952 and 1953, but the post-Korean War market brought about a downhill slide in sales.

Production of the Aero ended in the 1955, but the tooling was shipped to Brazil where the Aero survived into the 1970's. The Brazilian subsidiary was sold to Ford, who kept the Willys car going for a few more years.

In 1966, Kaiser reintroduced the Jeepster line of vehicles, (while still producing both a military and civilian versions of the WWII Jeep), which included a wagon, pickup and a convertible. These vehicles were intended to compete with the Ford Bronco and the Land Cruisers (which surprisingly the Land Cruiser and the British Land Rover, both got their start by copying the Jeep MB).

Jeep also made the boxy Wagoneer models, and the Jeepster was a cross between the usefulness of the truck and the CJ. These models were produced by Kaiser-Jeep until American Motors Corporation (AMC started as a merger of the Nash-Kelvinator Corporation and the Hudson Motor Car Company in 1954), bought the Kaiser-Jeep Corporation in 1970 for $75 million dollars. AMC continued production of the Jeepster, as well as the other models. In 1972 changes were done to the Jeep styling.

AMC being the smallest of the Detroit automakers produced the Jeep line and other vehicles until 1987 when financial troubles caught up to the corporation. Chrysler bought AMC at fire sale prices in in the summer of 1987 acquiring all stock in AMC, including the French firm Renault. Production lines at AMC were so slow, that Chrysler outsourced some of its production to AMC with production of the Omni/Horizon and the M-body shifted to AMC’s Kenosha, Wisconsin plant.

The last of the AMC car line, 4WD Eagles, and the Renault cars were dropped. What was AMC became the Jeep-Eagle division of Chrysler Corporation. At the time of the acquisition AMC was to begin production of a new FWD large sedan at a new plant in Bramalea. This car Chrysler renamed the Renault Premier and production began late 1987 as a 1988 model. Other models from France, Japan and Thailand expanded the product line and the Eagle became the only American car not to offer a model considered an American car.

The decision to drop the Eagle was made before the merger with Daimler-Benz. Thus the Jeep-Eagle Division became the Jeep Division. After the merger, with the demise of Plymouth in 2001, Daimler Chrysler was left with three divisions, Chrysler, Dodge and Jeep. Jeep history is continuing to be made, through the era of Cerberus and into the Fiat years. Only time will tell if Jeep will outlast its parent corporations.