Difference between revisions of "IHRA" 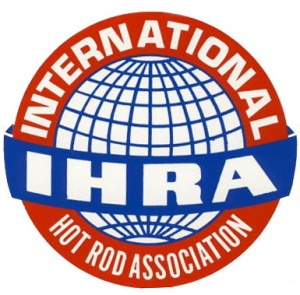 IHRA Logo from the 70s

Introduction from the IHRA Web Site

IHRA History The International Hot Rod Association has been a leader in sanctioning drag racing events in the United States since the organization was formed in November, 1970. Founded by east Tennessee businessman Larry Carrier, IHRA Championship Drag Racing has been responsible for many advancements in the sport, including new and innovative classes of competition, technological and safety developments.

IHRA has long been recognized as a pioneer in the motorsports industry. As an example, IHRA, through Carrier's vision, was the first to attract the involvement of a major corporation in drag racing. Carrier signed R.J. Reynolds' Winston brand on to sponsor the IHRA tour in 1975. The Winston-Salem, N.C. firm participated for more than a decade. Other series sponsors have included Scotchgard, 3M, Motorcraft and Snap-on Tools.

From 2002 until 2005, the IHRA series was sponsored by Hooters, an Atlanta-based restaurant chain. The partnership allowed IHRA to have its first non-automotive, non-tobacco series sponsorship in its history, and to have one of the most visible corporate brands as its title sponsor.

Today, the IHRA Nitro Jam Drag Racing Series is one of the most successful professional drag racing circuits in the world, hosting events throughout North America. With two national events in Canada, one in Ontario and one in Alberta, IHRA is the drag racing sanctioning body of record in Canada.

Always progressive and on the cutting edge, IHRA was also the first to introduce drag racing to a television audience. In the early 1980s, Carrier and ESPN reached an agreement for tape-delay telecasts of several IHRA national events. Today, IHRA drag races are a part of SPEED's programing.

In February 2001, Clear Channel/SFX acquired a majority interest in the organization. The agreement was the first drag racing entity for the entertainment giant, which worked under the umbrella of Clear Channel Motorsports; marketing monster truck shows as well as motor and super cross events. At the end of 2004, Aaron Polburn was named president of IHRA and currently holds that position. In late 2005, Clear Channel split into two distinctive corporate entities, Clear Channel Radio and Live Nation.

The IHRA is currently owned by Feld Entertainment, who bought the Motor Sports division of Live Nation in 2008. IHRA, Monster Jam, SuperBull, Monster Energy Supercross, AMA Arenacross, Nuclear Cowboys and Gravity Slashers are all a part of the Feld Motorsports brand.

Top Fuel is one of the most popular forms of racing in IHRA competition, offering 8,000 horsepower power plants, 4.5 second passes at over 320 miles per hour in the quarter mile and eight foot header flames - Top Fuel represents the pinnacle of drag racing performance.

By embracing new technologies such as electronic fuel injection and sophisticated nitrous oxide systems, classes like IHRA's Pro Modifieds have attained incredible performances. In fact, the IHRA is well known as the true home of Pro Modified racing. IHRA created Pro Mod out of the Top Sportsman ranks in the early 90s and the class continues to be one of the most popular forms of racing in the sport. The first ever Pro Modified race took place at the IHRA Spring Nationals in 1990.

The extremely popular Pro Modified class embodies the true spirit of hot rodding, offering a wildly diverse group of racecars and a variety of 2,000-horsepower engines. Combing classic body styles and modern equipment, constructors are permitted to extensively modify and enhance both apperance and performance. Competitors are offered the option of supercharging or adding nitrous oxide injection to the powerplants.

But IHRA may be best known for its liberal concept of Pro Stock racing - late model factory coupes with gasoline burning, 824 cubic-inch 'Mountain Motors' that propel them to 6.40 second elapsed times, 220-mph runs on the quarter-mile.

Included in the historical highlights of IHRA's Top Fuel category is the first-ever sub-five second run (also the first ever in drag racing), accomplished by Eddie Hill (4.99 sec.) at the Texas Motorplex in 1988. In 2005, Clay Millican turned the first sub 4.50 run in IHRA Top Fuel history at Rockingham Dragway.

IHRA prides itself with some of the quickest and fastest semi-professional cars in the country. Top Sportsman and Top Dragster entries regularly run in the mid-sixes or quicker. There is truly a racing category for every skill level and budget.

IHRA has also proven itself a major player in drag racing around the globe. In addition to its numerous tracks in the continental United States, IHRA oversees tracks in Canada, Hawaii and Aruba. In recent years the organization has made significant inroads north of the border. The IHRA's first major event in Canada was a one-off in 1992 at Toronto Motorsports Park, but it wasn't until later in the decade that Canadian events became the regular fixtures they are today. The IHRA is now the premier motorsports sanctioning body in Canada, holding two national drag racing events.

National events have proven to be a melting pot of family activity, as the pit areas are transformed into mini-communities during each race weekend.

Simply put, since 1970, the IHRA has been a pioneer in the world of drag racing and will continue to make major strides in the drag racing community well into the future.