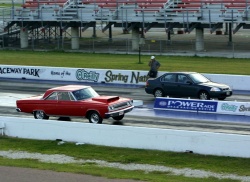 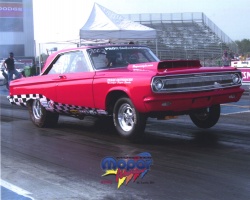 Big Red Ram prior to being named and acquiring the graphics. 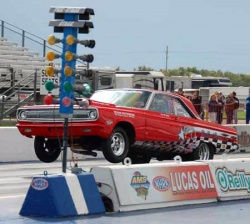 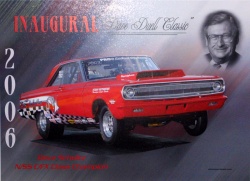 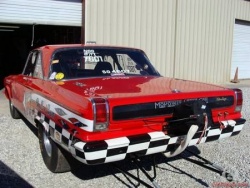 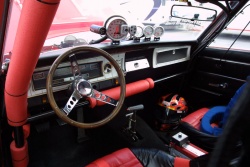 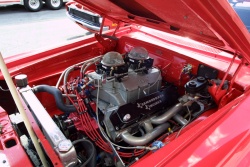 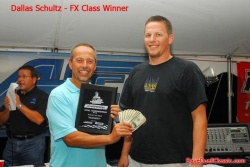 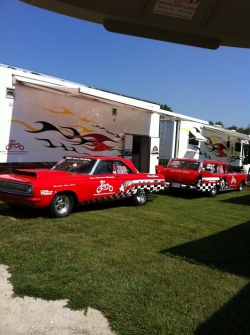 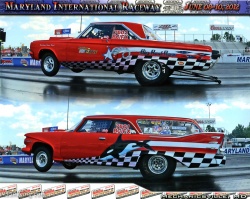 The Big Red Ram is a race car that has been modified to race in the Nostalgia Super Stock class of drag Racing. It is part of the MoparStyle Racing Team, owned by DDS Enterprises, Inc., and currently driven by Dallas Schultz. It is campaigned in the NMCA's Points Series, where the driver running it has never been less than 4th place since 2008.

MoparStyle member Big Jim Marsh bought the car in 1999 from the person in Ohio who built the car a few years earlier, and raced it in the Phoenix, Arizona area. It was a mid-11 second car with a 451 Low Deck motor, and a transbrake on a basic 727 transmission. The rear suspension was a Dana 60 supported by a pair of leaf springs. It was a very basic -- albeit good looking, weekend bracket racing car.

Dave Schultz bought the car in late 2002 and race it on weekends (pretty much unchanged) through October 2003.

In September 2003, Dave brought his Texas Big Bird ProMod car to the Monster Mopar Weekend, and got his first experience of Nostalgia Super Stock racing. After speaking with Dave Duell, who was the NSS coordinator, Dave found out that his 65 Coronet was a legal body style for NSS Racing. Upon returning home from "The Monster" he started looking into what was needed. On the NMCA forum he met up with Damon Kuhn who suggest Dave bring the car to his shop Texas Thunder Performance in Frisco, Texas. He did so in October and met Damon and his partner Mark Artis.

After a long discussion, Dave decided to allow Mark to back-half the car with ladder bars, Ford 9" rear end; install Jerico 4-speed transmission, Bonifante clutch, and a 540CI engine built by Damon Kuhn; and perform all of the body work. The car remained with Mark Artis until just before the 2005 Monster Mopar weekend. The 2005 Monster was the Big Red Ram's first outing, and the last race for Dave Duell, who died that December. As a matter of fact, the Big Red Ram was the car directly behind Dave Duell for his very last pass down the track.

The car made it to the semis at the Lonestar Shootout in November 2005.

Dave Schultz raced the Big red Ram in the Texas Outsider's series in 2006 and 2007. He ran the car in the 2006 and 2007 Dave Duell Classic (the NSS race at the Monster -- now named in honor of Dave Duell) -- winning the the C/FX class in 2006. The one problem with the car was that it was a handful to keep straight going down the track.

In October 2007, Dave ran in his first NMCA event -- the Nationals at Memphis, where he met Doug Duell (Dave's son) in the Semis -- but lost when the fuel pump gave up on the launch. Dave ran the complete series in the Big Red Ram in 2008 and 2009 -- finishing 4th in points for both years.

In 2008, the car went back to Texas Thunder for an interior update and transmission swap.

At the end of the 2009 season, Dave pulled the motor in favor of a new 580 CI built by Diamondback Engines. A week before the first NMCA race for 2010 the car still wasn't ready, so Dave bought the Vitamin C car from the owner in New Mexico, and raced it at NMCA's first 2010 race in Bradenton. When the Big Red Ram was ready for its first race, it was taken to the Mopars on the Plex in Ennis, TX. On the first pass it broke two of the Jesel roller rockers, forcing Dave to have to again run the Vitamin C for the second NMCA Race. Two more attempts to run the Big Red Ram found timing problems -- ultimately found to be connected to a bad distributor. Out of frustration, and because the Vitamin C was more dependable and ran straighter -- Dave gave up running the Big Red Ram, and ran the Vitamin C until his new car (the Texas Whale) was ready.

Dave's son Dallas moved up to the NSS class fromNMC in 2010, running a black 65 Coronet of Dave's called Texas Black Magic. It ran the 540 that was previous in the Big Red Ram, but stroked to 572. However, that motor never ran as good as it did as a 540, and had a constant oil leak (only when raced under a load) that could never be located, and would break up at 6000 RPM. The entire 2010 year was wasted for Dallas and he was so frustrated he considered giving up racing. We had the engine torn down over the winter of 2010 and the problems corrected -- but the motor still never ran as good as it should have in the first half of 2011. So a decision was made to completely rebuild the Big Red Ram.

Indy Cylinder Heads was contracted to build a motor identical to the motor they built for Dave's friend, Doug Duell; and the car was dropped off at the chassis shop Doug used -- RBC Race Craft. At RBC -- a variety of chassis and safety problems were found, which required the entire ladder bar set up and the crooked tube Ford 9" rear end getting pulled and replaced. The car was also converted to an automatic with a transmission from A&A, converter from ATI, shifter by PPP, and drive-shaft by Victory. Because so much had to be done to the car -- it was not ready for the first two NMCA races of 2012 -- and Dallas had to continue running Texas Black Magic until the 3rd race in Maryland.

Big Red Ram made its first debut at the third NMCA race in Budd's Creek, MD in April 2012. On the very first pass Dallas made in it it did a 9.40 @ 145 -- his fastest pass ever. However the car appeared to be acting like it was leaning out at 6500 RPM. Speaking to Indy, they said run it up to 6800 the next pass. Dallas did run it to 6800 and the problem appeared to go away. The next morning, the motor locked up tighter than a drum on the morning warm up. Pulling the motor found a spun #6 bearing. The motor had to be torn down, the Callies crank reconditioned, and two new rods. It was ready for the next race in Joliet, IL

Chassis work was performed by Mat Wright at BRC Racecraft in Newburgh, In.